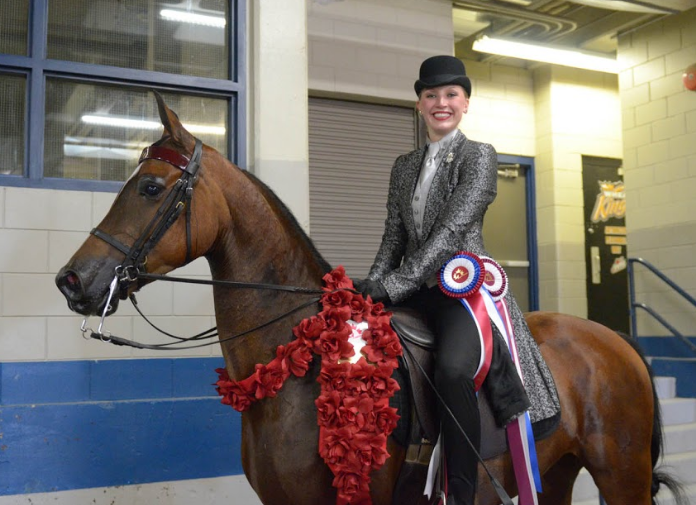 The Canadian Arabian and Half Arabian National Championship Horse Show is well underway as the beginning of the show contains competitive sections and finals. Kicking off the morning session at 8 o’clock sharp, a few early Championship highlights included Amelia Hruban and her gelding, Shaddo Magniphied. Amelia was awarded the National Championship title of this talented and tough Half-Arabian Saddle/Pleasure AAOTH class as she traveled all the way from Ocala, Florida to compete at this year’s horse show. In the same session, Canadian, Suzanne Calnan and newly acquired horse, Afires Soldier, garnered the Reserve National Champion title in the Half-Arabian Saddle Pleasure Geldings AOTH.

Starting off the afternoon session with the Half-Arabian Pleasure Driving ATD Championship, Rhein Standish of Boisvert Farm brings the National Championship win back to Louisiana under the direction of Joel Gangi.

The top two finishers that made their way into the winner’s circle this afternoon also kept the top two honors in the same barn. Both under the direction of John and Leah Beth Golladay of Golladay Training, barn mates Betsy Carlson and Laura Morton garner the top two rose garlands. Laura Morton and her mare CRF Intoxicating end this competitive country class with the Reserve National Champion honors. Betsy Carlson and her mare, ‘Ghaza’ garner the Champion honors to accompany their spotless performance in the Half-Arabian Country English Pleasure AATR 19-39 Championship.

After a successful first year in 13 & Under at Youth Nationals, Madison Rose makes her way to Canada. Competing in the Saddle Seat Equitation 13 & Under with her Multi-National Champion, DC One Man Show, Madison executes a precise rail work and seamless pattern with ‘Biggie’ resulting in the Unanimous National Championship title. Madison’s first year of 13 & Under was a success as she garnered multiple Championship titles this season.

Colby Powell Performance Horse’s first class of the show was the Arabian Country English Pleasure JOTR 18 & Under. Colby’s younger brother, Trentyn, showed the family owned and trained horse, Amplifire SAH, to the Reserve National Championship title. An exciting and memorable performance and accomplishment for their family as they start off the show at Canadian Nationals tonight.

RGT Thunder Road and Jeffrey Allen rode to a stand out performance as this pair trotted into the arena for the final class of the evening session. The Half-Arabian Country English Pleasure AAOTR 40 & Over class consisted of quality and presence from each competitor. Jeffrey Allen and RFT Thunder Road under the direction of Cathy Vincent finished the evening off with the National Champion garland to accompany the stunning, bright-eyed bay gelding.

The excitement from the first full day leads to a promising remainder of the show. The show starts back at 8 o’clock sharp with the Arabian Mare Breeding AAOTH Championship class, followed by multiple competitive sections and finals for the respected versatile divisions of the Arabian breed.