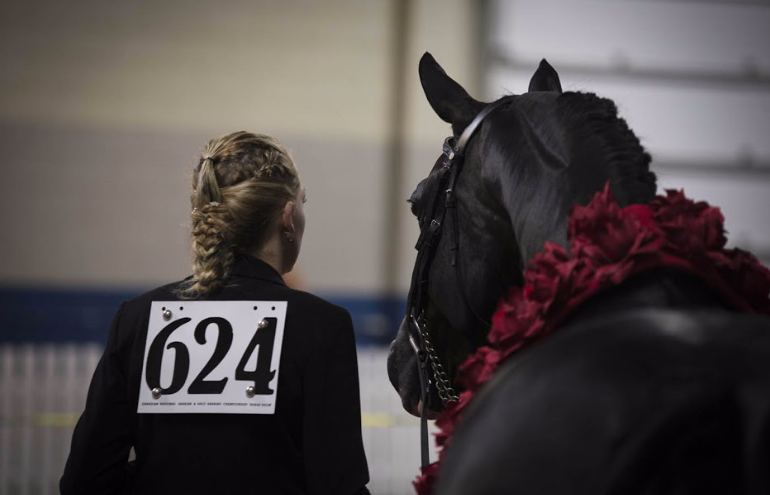 Tuesday morning’s session started off the show with memorable and noteworthy competition. A naturally competitive class, the Arabian Hunter Pleasure JTR 14-18 was full of consistency, presence, beauty and grace leaving the class difficult to place the top two honors. The National Championship title was gracefully awarded to the beautiful chestnut mare that was bred, owned and trained by Rick Gault - RGT Zymphony.

The upcoming future of young, talented horses in the industry was promising in the seven horse Half-Arabian Country English Pleasure Junior Horse class. Larry Hoffman and the young Black Daniel’s chestnut gelding, Whiskey Tango, led to a performance that portrayed a fresh, bright-eyed and a finished style. This gelding brought the Reserve National Championship title back to Hesten Park for owner, Jenna TeKolste.

Finishing out the morning session, the Arabian English Pleasure AAOTR 40 & Over Championship resulted in entries of high quality, power and energy as the horses entered the arena. Extraordin Heir, a sporty gelding that demonstrated effortless motion and a pleasurable presentation by owner Leslie Doran Sommer of Shamrock Farms LLC, defended their title and brought home the National Championship for the second year in a row.

Continuing into the afternoon session, the Arabian Country Pleasure Driving ATD Championship paved way for garlands to be distributed. The consistency and ease portrayed in this class was simply demonstrated by the amateur drivers as they presented their horses. A clear stand-out from the moment of entering the arena, Vendettaa and Beth Jupp navigate the arena making clear passes to present their precision at their change of gaits. Reserve National Championship honors was awarded to Autums Afire SCR. Awarded the National Championship honors, Beth and Vendettaa’s victory pass accommodated the deserving title awarded to the mare sired by Beth Jupp’s versatile stallion, Mamage.

A new and talented horse in the Hunter division of the Performance world is PA Vaquero Kid. Entering the Arabian Hunter Pleasure Junior Horse Championship with previous trainer, Caralyn Schroter, this black gelding’s silhouette is hard to erase from your mind. Captivating the spectators and garnering the judge’s attention, the beauty and athleticism in this gelding was consistent throughout the class. Caralyn and PA Vaquero Kid garnered the Reserve National Championship honor in this talented pool of horses for owner Lela Reynolds of Scottsdale, Arizona.

The evening session of the Canadian National Championship Horse Show continues to grow in competition. The Half-Arabian English Show Hack JTR 18 & Under Championship was driven by a talented group of youth riders that displayed precision, timing, and accuracy as they presented their horses in all ten gaits. Jenna TeKolste showed her big, chromey, bay Half-Arabian gelding, Halsteads Watchme. New to the Show Hack division this season, Jenna’s ability to present this English gelding and stay consistent throughout this class was imperative as the two garnered the Reserve National Championship title.

Finishing out this rider’s final year as a youth rider, Makenna Rooker closed out the evening session of the show with her gelding, CSP Whos Your Daddy. Celebrating her nineteenth birthday, Makenna and ‘Finn’ presented a flawless performance in the Saddle Seat Equitation 14-18 Championship. The strong bond between horse and rider was evident in this partnership tonight as Makenna rode with grace and extreme horsemanship as she presented herself by finding open spots and executing a precise pattern. A congratulations is in order for Makenna and ‘Finn’ as they garner the National Championship title, adding icing to the cake for Makenna's birthday celebration.

Tuesday was full of memorable championship classes and advancements to finals. As the show heads into Wednesday morning, the session is full of quality Halter and Performance classes leaving the competition eager to present their horses to the judges.