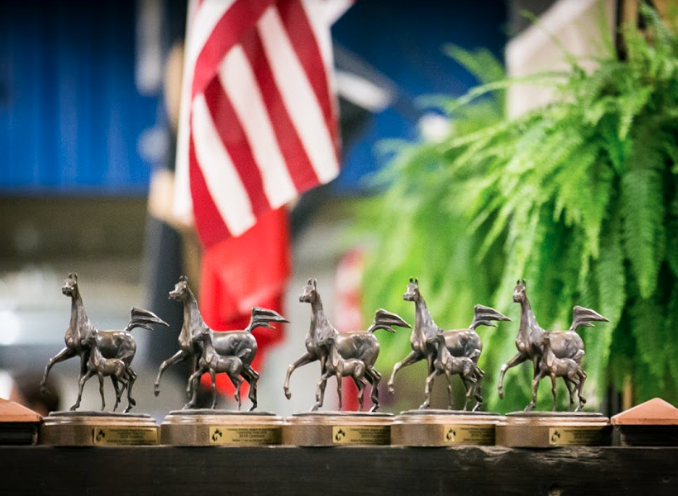 An exciting morning session started off Wednesday at the Canadian National Championship Horse Show. Continuing to introduce new riders into our growing industry, the Arabian Country English Pleasure AATR Select Riders enter the Westman Place arena at the normal trot. This impressive and competitive class brings a promising future for the Arabian breed. Top two honors were awarded to sporty show horses as they both portrayed a sea-horse shaped bridle. The steadiness and athleticism was paramount in this competitive class. The music has been an incredible asset to the horse show as the Reserve National Champion was awarded. Trotting up to receive their rose garland accompanied by the song ‘Thriller’, A Thriller FM and Brittney Wright were awarded this prestigious honor. The hooky, bright and steady chestnut, Captain Courageous PA takes home the National Championship title to start off the performance classes of the morning session.

The session continued into multiple sectionals covering the multiple divisions in our competitive industry. The Arabian Hunter Pleasure Open sectional, including the Arabian Western Pleasure Select Rider AATR leave excitement and top contenders to be presented in their respected finals.

Jim Lowe and Cey Hey portrayed precision as this upright, grey gelding entered the arena for the Arabian English Show Hack Championship. An effortless performance as the king of showmanship worked the arena making clean and clear passes, Jim Lowe and Cey Hey dominated the precision necessary in the Show Hack division. Leaving the arena with the red rose garland to compliment the outstanding performance, Jim Lowe rides Cey Hey to the National Championship title for owner Nancy O’Reilly.

The unwavering support and community at the Canadian National Championship Horse Show has been promising as we continue to grow closer as an Arabian community. A highlight from the evening session included Laura Morton’s National Championship victory with her mare, CRF Intoxicating. The textbook image of a Country English Pleasure horse was presented this evening by Laura Morton. The attitude, manners, performance, quality, and crowd support was not only evident in the performance given tonight, but throughout the show thus far.

As the "The Royal Red" show heads into the end of the week, the continued support throughout barns for fellow competitors garners the community to the arena. The exciting sectional classes are condensing into finals while the atmosphere of the Canadian Nationals leads into a promising, fun and memorable Thursday morning session. A big congratulations is in order for all competitors thus far and best of luck to those left competing this week.