Published on the 18th of August 2019 by Susanne Bösche 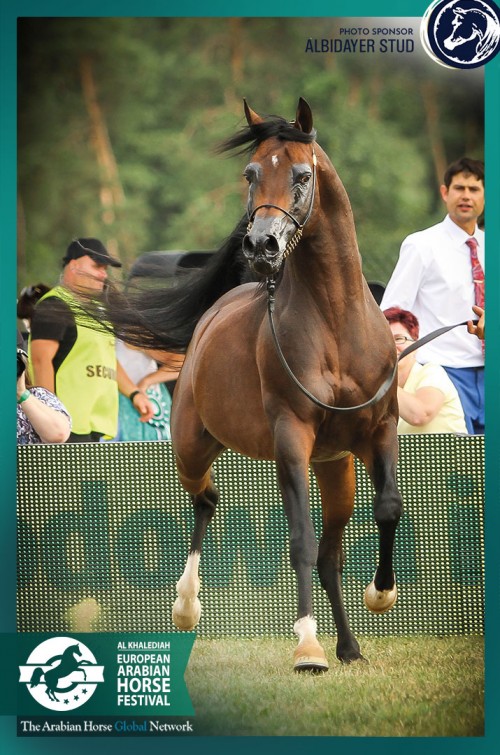 Do you know this feeling of an overwhelming sense of familiarity with something that shouldn't be familiar at all, the feeling that you have lived through the present situation before? In such a situation, we use the term déjà-vu which means, literally, "already seen." The Senior Championships of the competitive and prestigious 2019 Al Khalediah European Arabian Horse Festival caused such a feeling. Just like in 2018, a QR Marc son and a Gazal Al Shaqab daughter garnered Gold Champion Senior Stallion and Mare.

With Equator the reigning World Gold Champion Senior Stallion won the class for stallions 7 years + with 93,25 points and was awarded Unanimous Gold Champion Senior Stallion. The QR Marc son out of Ekliptyka is probably one of the busiest show horses in recent years, shown and shown again for various owners and lessees. Bred by Michalow Stud, Equator is now waving the flag for Ghazi Bashher Alotaibi. Equator is a close relative to 2018 Gold Champion, Emerald J (QR Marc x Emandoria). Both are stunning bay stallions which are tracing back in the tail female line to Estokada (Amurath Sahib x Saga).

The very same dam line is represented by the 2019 Gold Champion Senior Mare, Ekspulsja. This fleabitten wowed the spectators and judges likewise and received 93,75 points – the high score of the show and therefore Ekspulsja also received the award for Best in Show! Her marks included 3x 20 for Type, 2x 20 for Head + Neck, and another 2x 20 for Movement. Bred by Michalow Stud, this Gazal Al Shaqab daughter is out of famed Elandra (by Monogramm) is owned by Halsdon Arabians, UK. Shirley Watts bought this beauty that can make one's head spin for 400.000 € in 2013. Last year, another mare owned by Shirley Watts accomplished Gold Champion Senior Mare and Best in Show – the lovely Etnologia (Gazal Al Shaqab x Etalanta).

The Gold Champion Yearling Colt came from the second row, so to say. D Mezyan (FA El Rasheem x D Mazaja) ended up second in his class, bested only by his stablemate D Nayel. In the championship, the judges saw D Mezyan ahead the competition with D Nayel winning Silver and another Dubai Arabian Horse Stud' bred colt winning Bronze, D Shakhat.

Heartfelt thanks go to the breeders, owners, trainers, handlers, and fans of Arabian horses and all the generous sponsors.