The Three Brothers Of Al Orasia

Published on the 29th of March 2017 by Susanne Bösche 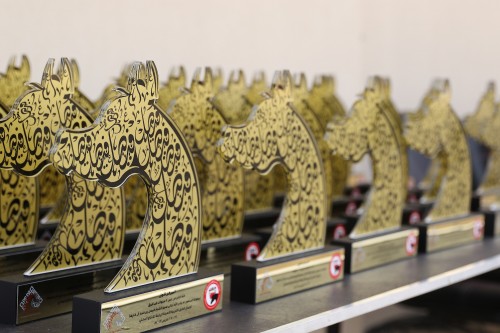 The history of the Arabian horse is closely tied to the history of Bahrain. This was proven once again at the Fourth Bahrain Produce Arabian Horse show. Amid intense participation and a distinguished audience presence, the Al Orasia Stud, proudly owned by Ms Muna Saleh Al Rashed, achieved a triple success, winning all male championships.

Al Orasia Stud not only won all Gold Champion Male titles but all three are maternal half-brothers. Bint Al Lail, born in 2002, is the pearl in Al Orasia’s breeding barn. Her sire El Gameer by Mouka-Tuam out of El Gameerah was born in Germany and represents Egyptian and Achental bloodlines. Doudja Al Lail by Fahim Hisan is the dam of Bint Al Lail, mainly Egyptian bred, too, with a bit of excellent Russian blood through Nazim and Nasmeshnik.

ZT Faa’Iq by Anaza El Farid out of ZT Jamdusha is the sire of bay Gold Champion Junior Colt winner Rahib Al-Orasia. This bay stallion adds the influence of Hanan son Jamil and the immortal Serenity Sonbolah, back to Rodania, to the pedigree of the 2017 born Bint Al Lail son.

The bay Gold Champion Senior Stallion Khaeel Al-Orasia, born in 2012, is by Tabaque, a grey son of Laman HVP out of Nevina by Abakan and back to Neva and the bold moving Kruschina and Neman, therefore heavily Russian influenced on the dams’ side.

The show honoured not only the rich history in Arabian horse breeding but also the remembrance of the late HH Sheikh Faisal Bin Hamad Al Khalifa. Under the patronage of Shaikh Nasser bin Hamad Al Khalifa, Representative of His Majesty the King for Charity Works and Youth Affairs, Chairman of the Supreme Council for Youth and Sports, President of Bahrain Olympic Committee, Honourary President of the Royal Equestrian and Endurance Federation (BREEF), the championship was launched on the Military Sports Association field at the Rashid Equestrian and Horseracing Club. Shaikh Nasser commended the good competitive level demonstrated by the participants while Dr. Khalid Ahmed Hassan, Chairman of the Championship’s Organising Committee, praised the efforts of the championship’s working committees and the good standards during the presentation.

The show was organized under the rules of Arabian Horse Organisation (AHO), whose representative, Dr. Mohamed Machmoun, praised the large attendance and the superb organisation of the competition. Not forgetting, to note the prominent role of the Kingdom of Bahrain in taking care of this sport, which is part of authentic Arab heritage.

Equestrian activities have a long tradition in the Kingdom of Bahrain and their growth and development is actively supported by the Bahrain Royal Equestrian and Endurance Federation (BREEF) the body that governs Endurance and Showjumping and organises shows. But not only shows are in great demand, the Rashid Equestrian & Horseracing Club hosts nearly 30 race meetings a season which at least one race for purebred Arabian horses per meeting. Endurance rides are a growing field, too. BREEF organizes eight to ten Endurance Rides in a season.

Al-Orasia Stud is a part of a growing Arabian horse enthusiast’s community in Bahrain. Alongside the Royal Stud’s legendary Bahraini Arabians many private farms have been formed and testify to the importance and interest in the Arabian horse in this country.