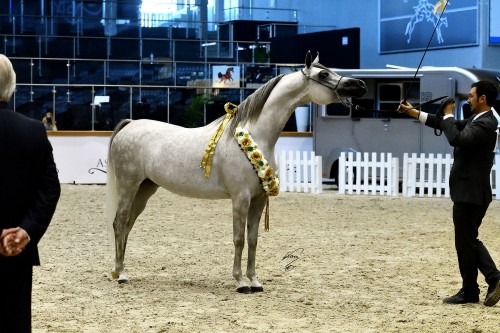 The Senior Mare Championships was an exceptional line-up of glistening white pearls. Turning heads in every ring she enters with her wonderful personality and charisma, it is clear Estokada K.A. entertains crowds and making headlines throughout her career. When the four years old QR Marc daughter entered the ring at the Belgian Nationals at Sentower Park in Opglabbeek she turned heads of the crowd and judges likewise and garnered unanimous Gold Champion Senior Mare, three years after her success as a yearling when Estokada K.A. was named Gold Champion Yearling Filly and Best in Show. Estokada K.A., bred and owned by Knocke Arabians, also won the award for Best Belgian owned horse and is out of the wonderful Michalow bred mare Espadrilla, by Monogramm and Emanacja by Eukaliptus, twice Polish National Senior Reserve Champion.

Silver was also a unanimous decision and went to DB Arabians’ Szakira, by WH Justice, with the Ekstern daughter Suzanna, bred by DB Arabians and owned by Agmal Arabians, winning unanimous bronze.

“The unanimous Gold Champion Senior Mare was a joy to see, trotting with such flare and animation and the Silver Champion was perhaps the more statuesque,” says judge Frances Atkinson (UK) and thanks the organizers for the invitation: “It was a pleasure to judge at the Belgian National Show. The venue was superb, the welcome was warm and generous and the organisation was excellent. I was impressed with the quality of the highly placed horses and though entries were occasionally a little light in numbers, there were plenty of really good horses to judge.”

The Senior Stallion Championship saw three big moving bays with the Enzo son Al Khabeer-D, bred by Dion Arabians and proudly owned by Mrs Detremmerie, achieving unanimous Gold Champion Senior Stallion. Al Khabeer-D’s dam is the bay mare Khabala by Nagadir (by Neman out of Neschi) – and out of Korona II by Koronec and Miss Ambernado, so mostly Russian bloodlines.

Silver winning Davos K.A., by QR Marc, was bred by Knocke Arabians and is owned by Florentina Arabians. Bronze went to Chainel, by Psytadel, bred by James Swaenepoel and owned by Charlotte Matthys.

But it was three years old dapple grey Agmal Jahiddah, bred and owned by Ahmal Arabians, who went away with the title Best in Show after garnering Gold Champion Junior Filly. “She had the perfect combination of femininity, elegance and substance. She also moved and showed brilliantly right throughout the show and took all before her with great style and confidence, a compliment to her empathetic handling,” Frances Atkinson remembers. “Her trainer - Johanna Ullström - and this exquisite Arabian filly were truly as one, a lesson to absorb in the modern show arenas.”

Agmal Jahiddah is by WH Justice out of Erabea, herself a daughter of precious Elandra from the world famous dynasty of Michalow’s E champions; the very same female line as Estokada K.A.

This was not to be the last time that Knocke Arabians received an award. The Championship Junior Colt ended with a great success, Knocke Arabians bred all three colts. Magnums Volcan K.A. received the rosettes for Gold Champion Junior Colt. He is an exceptional moving QR Marc son, this time in chestnut, a color he probably inherited from his grandparent. QR Marcs dam Swete Dreams was chestnut while on the maternal side of Magnums Volcan’s pedigree his dam FS Magnums Madonna is by chestnut Magnum Psyche.

Emperor K.A., of course by QR Marc, achieved silver and bronze went to Epic K.A., this time by Espressivo and therefore a QR Marc grandson. Epic K.A. is owned by Florentina Arabians.

There was no special award for Best Sire but without question, the gorgeous 2012 World Champion Senior Stallion QR Marc would have deserved such a title.

Among Frances Atkinson’s highlights were the foal classes: “In the very well supported foal sections, a bay filly caught my attention as soon as she entered the arena. Ultra refined, correct and bursting with Arabian type.” The winner out of ten fillies was Pearl Eden K.A., by – you might have a presumption already – QR Marc and out of Prisma, bred and owned by Knocke Arabians. Haras de Croissart is the proud breeder and owner of the second place, Persia de Croissart by Jaipur El Perseus.

“The winner of the colt foal class was also of outstanding type and thoroughly deserved to triumph in his section,” Frances continues. “I must confess to being completely dazzled by the more mature, second placed, chestnut colt whose condition and coat sheen reflected like burnished gold. He was a high quality foal indeed and showed himself as well as any adult horse, with incredible composure and much joie de vivre.” Again a foal by QR Marc, bred and owned by Knocke Arabians, took the first place: Justify K.A. out of Jolfa de Nautiac. Second became the Fayad Al Fayyad son Moncino DD, bred and owned by Dirk de Jockheere. 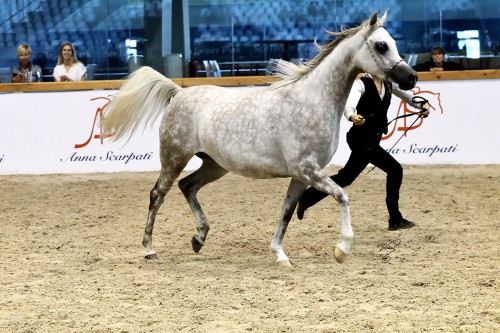 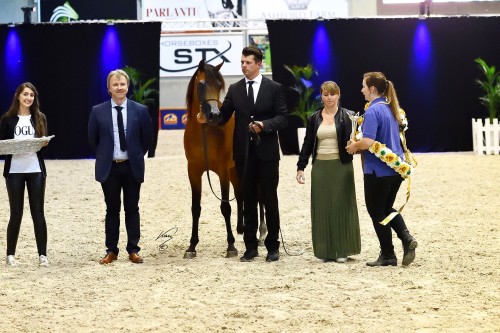 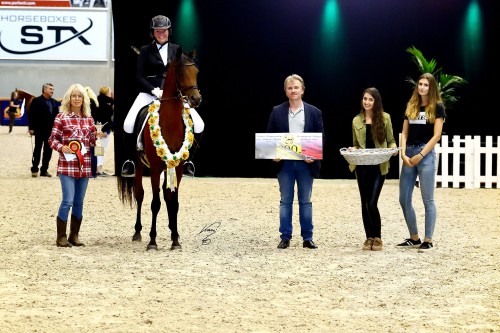 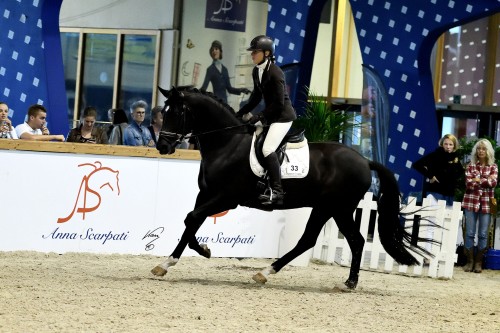