Published on the 4th of July 2017 by Susanne Bösche 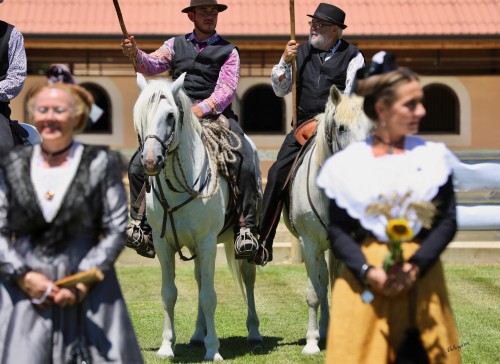 A flurry of white doves landed on the ramparts of the Chateau de Beaucaire and bear witness to another glorious day in southern France. The Chateau is just one of a large number of historical monuments in Beaucaire, a town in the Occitanie region. Some may say the glories that were once Beaucaire are clearly from a former age while HE Shekh Mohammed Bin Saud Al Qasimi, Sharjah, UAE, became fond of the area which is strategically perfect for the weather and connection to other countries. Sheikh Mohammed invested in a modern, dynamic high quality facility named Haras de Montpezat in 2012. Planned and run by passionate French horseman Daniel Souppat, Haras de Montpezat was founded as a breeding farm, insemination center and training centre. The farm extends over 35 hectars and boasts 50 boxes, covered walking machines and a covered arena, huge paddocks as well as several offices and a clubhouse. “There is also the possibility to rent some spaces for business meetings that are horse related,” says Daniel Souppat. “Currently, Haras de Montpezat hosts horses from Albidayer Stud for breeding and to prepare some for the shows.”

After five years of planning, building and working Sheikh Mohammed decided it was time to open the doors for visitors and kindly invited everybody for an Open Day at Haras de Montpezat right after the Mediterranean and Arab Countries Arabian Horse Championship in Menton. Many Arabian horse enthusiasts took advantage of this favourable opportunity. “We have had an open day and presented horses in Sharjah previously, but this was an entirely different group,” Dawn Martin, manager of Aldiayer Stud, explains. “This was the first time a presentation has been done of the Albidayer horses residing at Haras de Montpezat and Daniel Souppat did an excellent job of organizing the day. Upon arrival to the facility, visitors were greeted by a troupe of people in the traditional attire of the region. These were accompanied by a group of riders on Camargue horses, an ancient local breed which resembles a barb. These horses and riders stood in attendance, perfectly quiet, right next to the arena while the Arabian horses were turned out and were snorting and blowing.”

Following the presentation of the horses, there was a talk about the history of the Camargue horse, which are so typical for this region, as well as a small demonstration. People flock to the Mediterranean coast of France to see the herds of wild white horses. The Carmargue horse is said to have lived in the marshes and wetlands for thousands of years. They are excellent mounts for herding and work and the traditional mount of the “gardians” who herd the black Carmague bulls used in bullfighting in southern France.

Sorry, I am rambling – let me get back to the point. On the Open Day the focus laid on the dramatically beautiful Albidayer horses! I have asked Dawn Martin which horses are residing at Haras de Montpezat. “With the exception of a few younger horses we test at local show, the majority are breeding stock. We have some nice breeding mares in France and some foals from those mares. Grenedyne, the lovely Ekstern daughter is there, along with several young Marajj daughters from some of our best producing mares. They were shown in France when they were younger and have been successful, but now they have reached a point where they are more valuable to breed.”

In Menton, the exceptional Mozn Albidayer garnered Gold Champion Junior Filly. The very next day, visitors of Haras de Montpezat enjoyed Mozn Albidayers’ three-quarter sister, Mashael Albidayer out of Mattahari; she is, of course, also elegant and beautiful, but this time in bay like her sire Psyrasic. “Mashael Albidayer is there for breeding and perhaps will show again in the future, as well as a lovely Gazal daughter, a Falcon BHF daughter and some mares by Shanghai EA,” Dawn Martin tells.

It is no surprise that Mattaharii, by Magnum Chall HVP and out of Belindaa, is among Sheikh Mohammeds’ favourite broodmares. “Mattaharii and the Marwan Al Shaqab daughter DL Marielle out of RGA Kouress, the full sister to Marajj, have both been very important to our program,” says Dawn. “Mattaharii has most notably produced Mozn Albidayer by SMA Magic One, but has also had several other champions including the French National Champion Mayasah Albidayer by Marajj. Mayasahs’ full brother Mazin Albidayer has been champion at shows in Saudi and Egypt, as well as aforementioned Mashael Albidayer). DL Marielle, who we sadly lost last year, unfortunately only produced colts so we will be unable to continue her damline through her daughters. But her sons Kanz Albidayer by Ajman Moniscione and Raoud Albidayer by SMA Magic One are both multiple champions and exceptional individuals. Kanz Albidayer has already proven himself as a sire, and Raoud Albidayer will have his first foal crop next year. We have two more additional colts from Marielle - by Shanghai EA and ES Sarab - who were born in 2017. Both of these show tremendous promise for the future as well.”

Dawn is working with such phenomenal horses. Who is her personal favourite? “Marajj, of course, he is not only a great sire but a lovely individual. I worked with his Grandsire and Sire when they were both yearlings and he was with Sheikh Mohammed at the start. Mozn is also a special and very exceptional individual, as she is directly from our breeding program and is really one of the most beautiful and ethereal fillies in the world in my opinion.”

While white doves flying to the blue sky crossing Haras de Montpezat they witness the fantastic Open Day day and another historical monument – the passionate breeding program of Albidayer Stud. 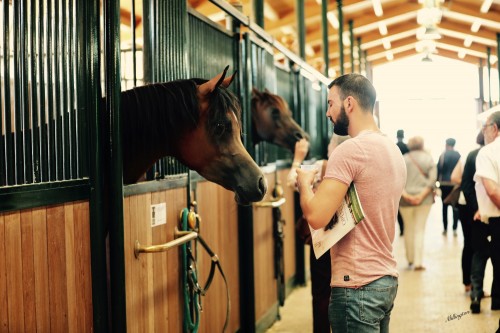 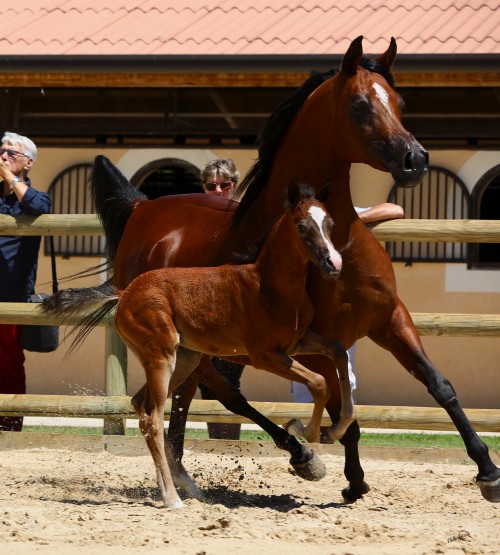 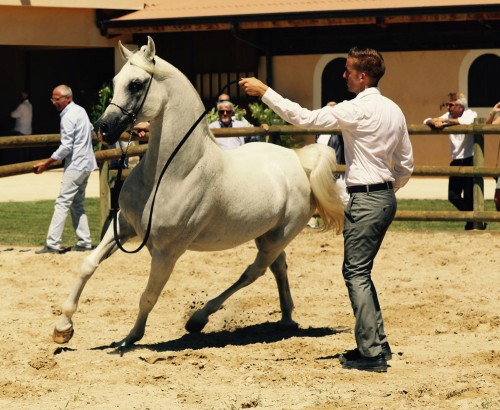