Published on the 16th of December 2017 by Susanne Bösche

All ribbons and garlands were given. When the 2nd KAAHC Championship closed on late Friday afternoon with a celebration of spirit after honoring the Arabian horse with an ECAHO A show for three days. Though the KAAHC Championship is much more than just another show. The event is hosted by the King Abdulaziz Arabian Horse Center (KAAHC) in Dirab, whose patronage King Abdul Aziz Bin Abdul Rahman Al-Saud greatly respected the Arabian horse for his strength, beauty, and purity.

The KAAHC was established under the supervision of the Ministry of Agriculture and is the official authority for all Arabian Horse matters in Saudi-Arabia. Continuous support of the Government and the Royal Family, the KAAHC is dedicated to preserving the heritage of the Arabian horses in its homeland.

Similar results could be seen with the yearling colts. Gold Champion Yearling Colts was Hilal Al Khalediah, by Baanderos out of Halah Al Khalediah, so inbred to Marwan Al Shaqab. Aforementioned Abha Qatar is the sire of Silver winner Mishaal AM and Bronze winning Ghazal LNJ II’s dam Gazals Couture is by Gazal Al Shaqab.

Once again, Arabian Horse Results was a Media Partner for KAAHC and provided all of the scoring and results immediately as the show happened. To see all the results of the show, please visit www.arabianhorseresults.com

We wish to thank the King Abdulaziz Arabian Horse Center for hosting KAAHC Championship in Dirab and for partnering with Arabian Horse Results. 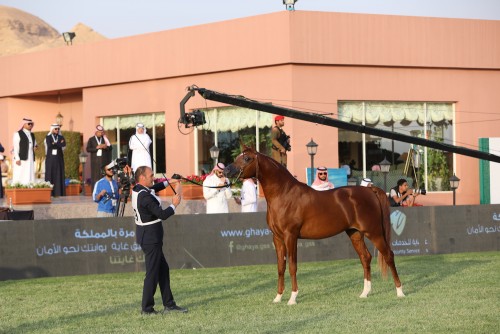 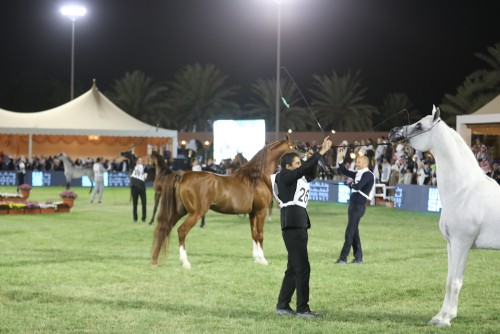