Published on the 23rd of June 2019 by Susanne Bösche 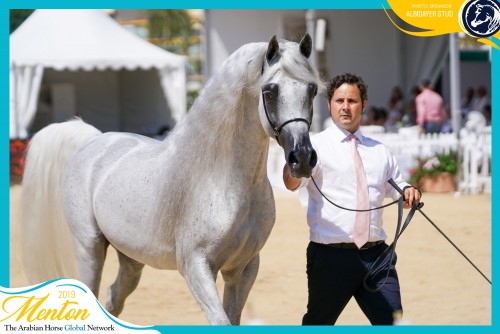 Beige and White - a trend that is hard to miss this summer, because it radiates the gray weather and makes you really want to summer, sun and good mood. The perfect fashion trend for a sunny weekend at the Arabian Horse Championship celebrated at the beach in Menton with Arabian horse beauties dancing and prancing from around the world.

Among the white beauties who accomplished championship roses was Gold Champion Junior Colt HL El Ganador (HP Shakir Te x Lonco Bay Maria). Well, not already really white but what a show stopper with amazing movements. The three years old colt returned to the show ring after a pause in 2018 and a successful show year in 2017, when HL El Ganador achieved Gold Champion Yearling Colt in Menton and Aachen as well as the UAE Nationals. This year, the three years old colt received the highest points of all colts (92,63), Best Arabian Type Junior Male and Best European Horse in Menton. The latter award is a bit confusing, as HL El Ganador is owned by Hanaya Stud, Switzerland, yes, but bred by Matthei Duch, Chile.

It is always something special to see renowned champions and great sires back in the show ring – and experiencing Shanghai EA in Menton was no exception. Lots of Arabian horse lovers will remember Dubai 2016, when the glistening white Shanghai EA took Gold at the Dubai Championship sending Baanderos and ES Harir to Silver and Bronze respectively. In Menton, Ajman Stud's champion sire Shanghai EA (WH Justice x Salymah EA) treated the audience and judges to a great show alongside Frank Spönle who also led aforementioned HL El Ganador to Gold.

The Senior Mare Championship was the same. Highest score of all mares was 2018 Unanimous US National Champion Senior Mare Baviera HVP (92,88). The accomplished show mare represents a "gold cross" of the Arabian horse scene, sired by Marwan Al Shaqab and out of HB Bessolea Baviera HVP is a full sister to World Champion Baanderos and was among the lots at the inaugural IntArah Embryo Auction in Brazil 2011. Bred by Nelson de Oliveira Prata Pino Moreira, this white mare is the realized dream for proud owner Abhaa Arabians, KSA.

In Menton, Baviera HVP was only bested by Noft Al Nayfat, another white jewel. Her sire is the World Champion Ajman Moniscione, her dam Eagleridge Passionata, by Sanadik El Shaklan, is a champion herself and a valuable broodmare for Ajman Stud. Bred by Cindy McGown and Mark Davis, USA, Noft Al Nayfat is proudly owned by NAF Stud, KSA.

A newly founded award has a sad background, the Willi Poth Award. "No type, no Arabian horse", late Willi Poth always said. The dedicated breeder of Straight Egyptians, show moderator, and judge left this earth forever in April 2019. Willi and his family spent 20 years in the beautiful South of France and the family decided to implement an award for the most classic horse of the show chosen by representatives of the Poth family. The choice fell on Italian bred My Whos That Girl, sired by Shanghai EA out of Lady Prue, bred and owned by Manfredi Massimo.

When another exciting Menton Championship it was time to relax at one of the many sunny spots of Menton, its luxuriant vegetation, the lemon trees or the medieval Old Town.

Please figure out all results and great photo impressions, all taken by Saleh Mostafa, on our website.