Published on the 26th of January 2019 by Susanne Bösche 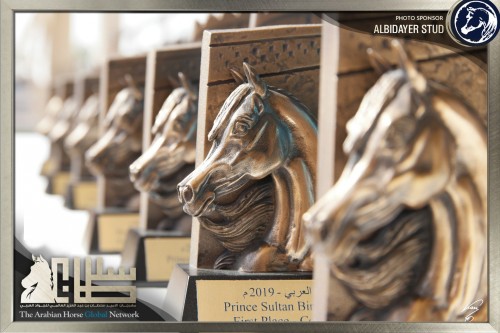 While literature likes to see brothers as rivals reality proofs sons can share the most fulfilling of bonds. If family relationship produces such powerful emotions everything seems possible. Abdulwahab and Khalid Alsayed followed their hearts and their heritage and started an amazing breeding program just ten years ago – Al Sayed Stud. Meanwhile, they rank amongst the global players. The results of the Prince Sultan Bin Abdulaziz International Arabian Horse Festival (PSAIAHF ) were once again the prove for the great idea of the two Alsayed brothers. Four times Gold, one Silver and two Bronze medal for Al Sayed Stud!

The Festival is held under the patronage of His Royal Highness, Prince Khaled Bin Sultan Bin AbdulAziz Al Saud, and it opens its doors every year on January for five consecutive days in Al Khalediah Farm, the headquarters of His Highness's farms in Tebrak city, west of Riyadh.

Kuwait was in front, too, in the Junior Fillies Championship. It was a tough competition, so many beautiful top-class fillies, several of them are already accomplished show champions. It was the EKS Alihandro daughter Rshediah Alkhashab (out of Symphony Of Love) who walked away with Gold for her proud owner Mubarak Hamdan Alkhashab of Al Khashab Stud, Kuwait. Bred by Psynergy Enterprises, USA, Rshediah Alkhashab achieved Silver Champion Junior Filly in Menton and Aachen last year. Haifa ED (Kahil Al Shaqab x Prestic) won Silver with LR Era De Excalibur (Excalibur EA x Expected Beauty) taking Bronze. LR Era De Excalibur was named 2017 Gold Champion Yearling Filly at the All Nations Cup and World Championships so one can estimate how high the quality of the junior fillies at this first 2019 ECAHO title show was.

The Junior Colts Championship saw the second win for Al Sayed Stud. The Alexxanderr son Maher Al Sayed, out of Mera Al Sayed. The dark grey Maher Al Sayed is no newcomer to the showring. He garnered All Nations Cup Silver Champion Yearling Colt in 2018. Silver was given to the Emerald J son Sultan Alenaya (out of Ammona) and Bronze was awarded to Raney Al Khaled (Kahil Al Shaqab x WA Magna Rouge).

He bears the name of an ancient ruler - Alexxanderr! Easily the Excalibur EA son out of AR Most Irresistible took the Gold Champion Senior Stallion. What a great show for proud owner Al Sayed Stud but also a great success for the breeders Frances Butler and Brandi Carson, USA. Alexxanderr was winning titles around the globe as a junior. We remember him winning Gold at the PSAIAHF, All Nations Cup and World Championships back in 2017. Now he returned into the show ring wowing the judges and spectators likewise. The Senior Stallion Championship saw the highlight of the strong bond of brothers. Al Sayed Stud also celebrated the success of their senior sire Eden C (Enzo x Silken Sable), who won Bronze. Two judges even saw Eden C as Gold Champion. The Silver Championship was given to the chestnut Glorius Apal son Ascot DD (x Lady Mina DD).

Thank you to the organizing PSAIAHF team, who helped make this a very memorable event and thank you for cooperating with Arabian Horse Global Network. It is always a pleasure to visit this event which is a celebration of the Arabian horse and has been implemented to promote and develop the equestrian disciplines in which this extraordinary animal competes a century ago.

Please figure out all results, lots of photos and livestream in replay on our website.