We Are The Champions

Published on the 7th of January 2018 by Susanne Bösche 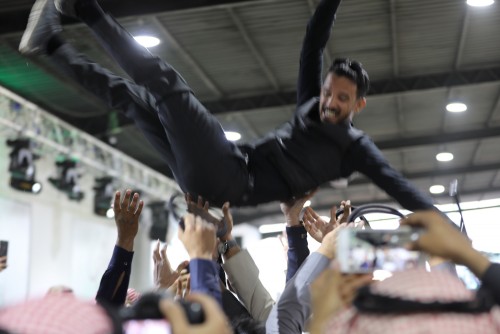 Men sing and dances by flowing into a spirit of rhapsodic jubilation, the winner’s trophies held aloft. Some lift their smartphones to film the whole scene. In Europe, men would probably sing: “We are the champions”, by immortal British rock band Queen. But we are in the Kingdom of Saudi Arabia and it is a happily relaxed atmosphere at the Riyadh Arabian Horse Show, a three-days-event.

Arabian Horse Show enthusiasts know too well, the most anticipated championship is always that of the senior stallions. The winner is always full of overflowing joy. However, this scene in Riyadh was amazing and everybody was happy for Naef Mansour Motab Al Eida'a, proud owner of Gold Champion Senior Stallion Tamy II, a son of champion maker WH Justice. Silver went to Ibn Jameelat Al Khalediah, by Moutaz Al Biwaibiya while the Marwan Al Shaqab son Barakah Al Zobair garnered Bronze.

It was again a show where the massive influence of Marwan Al Shaqab and his sire Gazal Al Shaqab became quickly evident. For example, through one of the most exotic and accomplished stallions of this influential sire line, Emerald J. Formerly owned by Al Muawd Stud but now back on European soil with his breeder Christine Jamar, Emerald J is by QR Marc by Marwan Al Shaqab out of glorious Emandoria, by Gazal Al Shaqab. Emandoria herself is one of the most accomplished mares in Arabian horse scene, being World, All Nations Cup and European Champion, both as a junior and senior, as well as United States National Champion, World Cup Champion, and – of course - Polish National Champion Mare.

Especially Equador, out of Just So Versace, caused a lot of attention, a lookalike of his sire. The breeder Ryan Bryn Jones from the UK led Equador to Gold for the proud owner Naser Jaser Al Sobaie. An English fan club not to be underestimated followed the age class and the championship to celebrate Equador’s clear victory. The Jareer Al Khalediah son Aali Al Khalediah achieved Silver with his stablemate Wajeh Al Khalediah, by Razi Al Khalediah winning Bronze.

Gold Champion Yearling Filly Reem Al Aloush, bred and owned by Abdulrahman Bin Abdulaziz Bin Mohammed Al Aloush, is not only sired by Emerald J. One can also find Gazal Al Shaqab on the female side of Reem’s pedigree. Her dam Ryaanh Al Muawd is by the Gazal Al Shaqab son Stival and traces back to solid Polish lines. Marquis CAHR is also the sire of Silver winner Helwat Al Khalediah out of Halah while Bronze winning Shahla Al Muawd is again by Emerald J.

Special thanks to the organizing team around show director Al Muawd Stud for hosting this amazing event. Arabian Horse Global Network would like to extend our thanks for the excellent collaboration. 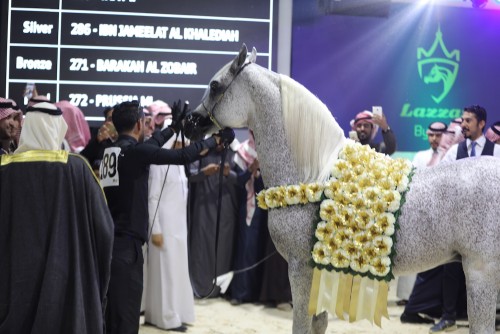 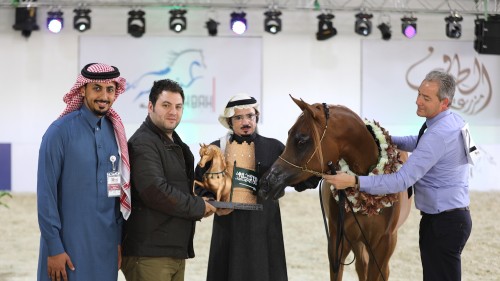 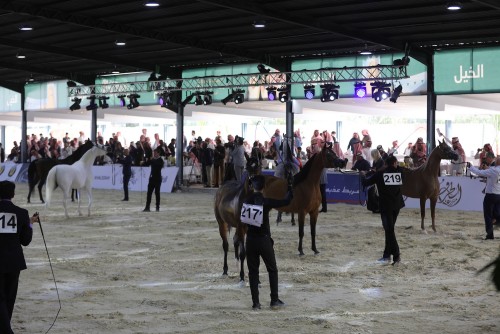